View cart “Dental Herbal Kit” has been added to your cart.

Our teeth and gums have a profound influence on our health and well-being.

Our Dental Kit contains several components which include Dental powder, Natural mouthwash, Hydrogen peroxide Activator 7% along with a Tongue scraper.

The dental powder contains Himalayan salt, baking soda, prickly ash, echinacea & comfrey root powder, accompanied by the natural flavors of cinnamon or mint flavor- depending on what you prefer. All of the ingredients are certified organic wherever possible.

This kit is especially recommended for anybody who is suffering from dental problems, this includes excess cavities, mouth ulcers, bad breath, and other conditions, or for the health-conscious consumer who only wants nothing but what nature intended in their mouths.

Typical Dosage: Use as part of your oral health routine 2x daily

A bit about the Dental Kit – Nature’s way of caring for your Teeth and Gums.

For years I suffered from dental problems! My early visits to, what we called at primary school, the “murder house” were traumatic to say the least. Not only did the school dental nurse use a foot pedal drill (in an age of electricity!) the sessions were painful and traumatic. Like most people in my age bracket the dental nurses mercilessly drilled to replace good dental enamel with a toxic substance considered at the time to be superior to enamel – dental amalgam – ie 50% mercury – a potent neurotoxin!

Fortunately, dentistry has come a long way since then. Many dentists have finally realised that mercury should never enter a human body – let alone carry it around for life in one of the most absorbable surfaces in the human body – the mouth! Many dentists today refuse to have mercury amalgam anywhere in their practices.

Today we have better dentists using painless or close to painless methods. Dental filling materials are now largely biocompatible and many dentists now have a resident hygienist. Despite all this, dental problems are still almost endemic in New Zealand and civilised countries.

Our Dental kit contains the leading edge of Natural holistic Dental care. We recommend you visit your dentist at least once a year for a checkup and also to see a dental hygienist at least every 6 months. Alongside this program, you and your dentist will be amazed at the wonderful results. Less or no decay, perfect gums, fresh breath, and a smile that says you have saved a great deal of money and you have happy teeth and gums.
Dental Health

Healthy teeth and gums have a profound influence on our physical and psychological well-being. A smile is the simplest and most expressive piece of body language which reveals a great deal about our personality and self-image. The joy of a smile, the confidence of fresh breath, and the pleasure of clean teeth give radiance to the personality. The health of our teeth and gums not only reflects our overall health but can also profoundly influence it. Any imbalance in a tooth (decay, abscesses, gum diseases, some fillings, and root fillings) can affect the auto-immune system, creating a host of seemingly unrelated problems.

Prevention is the key word and if only individuals knew more about simple dental techniques such as correct brushing and simple commonly available herbs and spices (even household salt and baking soda), there would be far less of, arguably, one of New Zealand’s greatest tragedies – tooth decay and its predisposing condition – gingivitis (gum inflammation).

The mouth, including all mucosa (soft tissue), inner cheeks, the roof of the mouth, tongue, gums, and teeth all have an integral homeostatic balance.

The correct P.H. (acid/alkaline balance) is essential, as well as proper mineralisation and cleansing, to maintain the healthy flora and minimise harmful pathogens.

Disease and decay-producing bacteria which form colonies in the gingival margins (the space between the tooth and the gum), and between the teeth, secrete toxic acids corrosive enough to dissolve the hardest substance in the human body – enamel of the teeth.

The enamel is not the only thing they damage, however – once decay sets into the tooth, toxins travel right into the interior of the tooth and find their way further down the dentine to the very root nerve and eventually to infect the body’s system through the blood stream.

However, the bloodstream is already affected by the plaque bacteria within the gingival margins. The metabolism of the mouth is probably one of the fastest in all our physiology. By the time it takes you to read this sentence nearly all the cells lining the mucus membrane of your mouth will have been destroyed and regenerated. How effective this process is for the rest of the oral environment is up to you. The importance of proper dental hygiene cannot be underestimated.

A year of research was completed to create the best of natural methods that work efficiently to aid the health of teeth and gums with this great dental kit.

In this kit you will find:

Dental Powder: This is a combination of Himalayan Salt, Baking Soda, Prickly Ash, Echinacea & Comfrey powder and your choice of Peppermint or Cinnamon flavour. We use all organic input wherever possible.

This combination has been used for many of years as an alternative to common household toothpaste.

At last, NO more Sugars, Aluminium, or Fluoride going into your mouth! Collectively these three ingredients provide the perfect support for healthy pH, essential minerals, and local immunity for healthy gums and teeth.

How to use the Dental Powder:

Simply wet your Toothbrush with water, dip it into the Dental Powder, then put 2 drops of the Hydrogen Peroxide “Activator” on (1x daily). Brush for 1-2 minutes. Rinse, then follow up with the Natural Mouthwash Spray for that fresh clean breathe. NOTE: Use the Hydrogen Peroxide activator until it’s all gone, and then continue with just the powder. We recommend using 1-2 bottle’s of the Activator per year, these can be purchased individually from us direct.

Hydrogen Peroxide Activator 7% We have included this in the dental kit because it rapidly oxidizes and destroys bacteria, especially that little fella known as “Berty Germ” – streptococcus mutans, one of the main group that causes tooth decay and periodontal disease!

Natural Mouthwash: This is a cleansing, immune-stimulating mouthwash that has been made to not only freshen the breathe but more importantly cleanse the mouth of any unwanted bacteria whilst keeping the gums healthy and strong. Our mouthwash is a natural blend of Prickly ash, Myrrh, Peppermint, Echinacea, Cardamon, Cinnamon & Licorice blended with colloidal minerals and vegetable glycerine. Pleasant and effective for the whole family.

Tongue Scraper: Your tongue scraper is either made of stainless steel or copper.

We recommend the use of dental tape or dental brushes, not floss. (Many find that floss cuts into the gums causing bleeding). Dental tape or brushes are best used after meals when needed and at the very least once daily to disorganise the plaque and dislodge food residue. Rinse. You can pick these up at your local pharmacy or supermarket.
Health Benefits of Tongue Scraping:

Removing dead bacteria from the tongue, thus preventing the reabsorption of these toxins back into the system
Waking up the organs each morning, as different areas of the tongue correlate with different organs
Sparking the digestion
Enhancing the taste buds
Removing bad breath (halitosis)

The “bad” bacteria in the mouth has recently been linked to other disorders in the body from digestive issues, cardiovascular disease, and even Alzheimer’s. The coating on your tongue is a clear sign that there are toxins prevalent in the system. Therefore in order to treat this issue from the inside out, one will need to detoxify the system and remove the cause(s) of the toxins. New Zealand Herbals has a complete and simple system by which to do this. Our main detoxification program is:

Why we say NO to Fluoride:

However, no mineral or trace element is found on its own in nature – Minerals come in complex form – along with other minerals. Calcium fluoride is found naturally in a good natural diet especially one based on nutrient-dense foods, soups, and broths.
Dental Amalgam

Mercury is a natural element, a toxic heavy metal, which is highly volatile, the vapor form having the ability to kill cells outright rather than merely do damage.

Substantial amounts of mercury leak from amalgam fillings, it is 1000 times higher than environmental agency permits as safe.

The average level of mercury vapor in the mouths of people with amalgams varies between 50 and 150 ug./cc.

When removed from your mouth, dental amalgam is considered toxic waste by the Environmental Protection Agency and must be handled in a certain way to protect dental office personnel from mercury poisoning.

This is the same stuff, unchanged, which just came out of your tooth!

There are over 125 known symptoms of mercury toxicity.

Most of them are vague and non-specific. It is not known what role mercury toxicity may play in MS (multiple sclerosis) and ALS (amyotrophic lateral sclerosis or Lou Gehrig’s Disease), however Dr. Hal Huggins, a dentist in Colorado Springs, Colorado has developed a protocol for amalgam removal and replacement, and in treating large numbers of MS and ALS patients has noticed the improvement of symptoms in 91%. People who were wheelchair-bound often get up and walk!

Other people have nervous system symptoms such as anxiety, insomnia, depression, loss of appetite, and these people also demonstrate a high incidence of recovery from these troublesome symptoms after removal of dental amalgams. Many people with severe long-standing depression are cured by amalgam removal and chelation. Vomiting, gastritis, colitis, excessive salivation, abdominal pain, anger, sleep disturbance, headaches, heart attack, dizziness, speech disorders, leg cramps, clumsiness, bad breath, fatigue, and irritability just to name some of the 125 which have been documented so far.

If you already have symptoms of mercury toxicity, these symptoms are coming from mercury already vaporised from your amalgams and now residing in the tissues of your body, particularly in your brain cells. The amalgams represent a source of future further intoxication and, for that reason, should be removed.

IMPORTANT NOTE: Please do not make any arrangements to have your Mercury fillings removed without consulting with me first. It is ESSENTIAL that you are on the right programme to support your immunity whist these toxins are released.

Whether or not you decide to have your dental amalgams removed it is most important that you protect your immune, digestive and nervous system. A few points to wrap up on Dental health:

Visit your dentist at least once every 6 months for a full check-up and assessment. Preferably choose one who has a holistic practice and is familiar with mercury amalgam replacement and some knowledge of herbal/homeopathic remedies.

Support your immunity with Blood Tonic and keep your mineral saturation up by taking Mineral Max and Cod Liver Oil daily.
Drink Pure water – NO Chlorine/Fluoride

Be the first to review “Dental Herbal Kit” Cancel reply 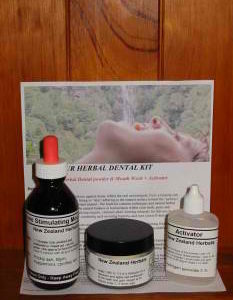