This all purpose formula contains medicinal herbs which enhance the body’s ability to cleanse itself of toxic and metabolic waste. Many testimony reports have come back about this tonic helping to heighten energy especially where there is chronic fatigue, and skin problems.

RED COVER (Trifolium pratense) Firmly entrenched in American folklore red clover has gained a reputation as a fine blood cleansing herb. Rich in micronutrients it posseses activity against several bacteria, the most significant of which is the pathogen that causes tuberculosis. A good dietary supplement of vitamin A and Iron it also contains B- complex, vitamins C,F, and P, some selenium, cobalt, nickel, manganese, sod
ium and is particularly rich in magnesium, calcium and copper. 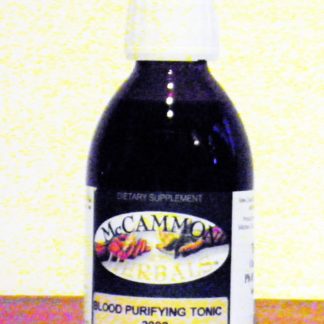